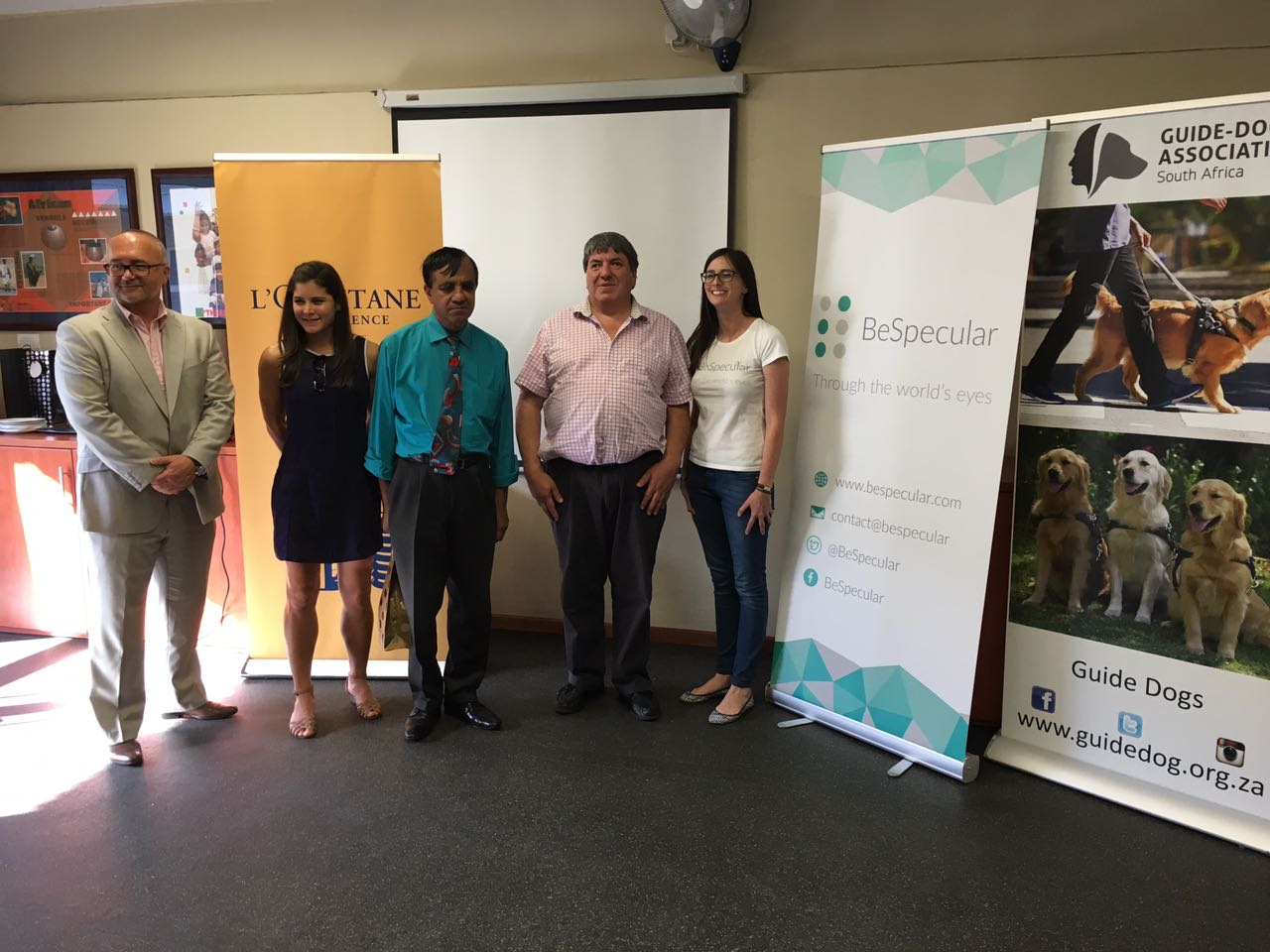 The theme for World Sight Day 2016 was: Stronger Together. The International Agency for the Prevention of Blindness (IAPB) championed the cause under the VISION 2020 Global Initiative. We at BeSpecular support the call to action and brought together various individuals, organisations and members of the press to highlight how important our relationships, partnerships and friendships truly are.

We celebrated World Sight Day on 13 October 2016 at the National Council for Persons with Physical Disabilities in SA offices in Johannesburg. We were thrilled to have Ilse Hayes (7 time Paralympic medal winner) as our Guest of Honour. Other important guests included members from the South African National Council for the Blind, SA Guide-Dogs Association, L'OCCITANE en Provence, & EYESITE.co.za. It was a wonderful celebration of what organisations & individuals across South Africa have achieved.

I encourage everyone to be present in your daily lives & to make the small moments memorable.

The event began with Ilse Hayes taking us through her journey from being a sports-loving young girl to ultimately realising her dreams by competing at the Paralympics. Ilse has Stargardt's disease which has affected her vision in both eyes. Nonetheless, Ilse has become a phenomenal athlete of the highest calibre. We learnt about some of Ilse’s worst injuries and how she overcame them one step at a time. Ilse continuously made mention of the support structure she has surrounded herself with including her fellow teammates, coaches, and her husband: Cassie. Ilse’s devotion to her faith is a huge part of who she is. During her training for Rio, Ilse asked the Lord to prepare her heart for what He had in store for her since she viewed Rio as a mission field for her to shine His light and walk on Holy Ground. Ilse concluded her talk with the following powerful words:

Image: Ilse Hayes, Paralympic athlete, standing in front of the audience as she shares her journey.

The second speaker was BeSpecular co-founder: Stephanie Cowper. Stephanie shared the progress that the BeSpecular team has made since its launch in July. The BeSpecular community has grown tremendously both in members and global reach. On World Sight Day, Stephanie was proud to announce the launch of BeSpecular’s next offering: BeSpecular for Business. BeSpecular for Business will enable employers to create a community within their companies that is inclusive of their visually impaired, blind and deafblind employees. Corporates offering their impaired employees the BeSpecular tool will not only helping their existing employees, but also make it more favourable for unemployed VIPs to enter the workforce through the on-site support structure.

Image: Albert Peters telling us about the SA Note which has been developed by the SANCB and CSIR.

Next up to take the floor was Assistive Technology Specialist from the SA National Council for the Blind: Albert Peters. The SANCB is an umbrella organisation that supports over 100 other organisations that work for and with the blind. A large focus of the SANCB is on the prevention of blindness where they perform cataract surgeries throughout the community, along with other sight-improving operations. The SANCB in partnership with the CSIR has embarked on developing a screen desk computer with speech functionality. The SA Note is a standard QWERTY keyboard with all the functionalities built into it. The SA Note is built mostly out of off-the-shelf parts meaning there would be no extra problems with maintenance and the software is opensource, but most exciting is the fact that the computer will have an ethnic language speech synthesizer. Languages such as Zulu and Xhosa can be processed on the SA Note, making it truly unique to the South African market!

Image: Pieter van Niekerk standing in front of the audience telling us about the advancements made by SA Guide Dogs.

We couldn’t host an event on World Sight Day without recognising the important work done by SA Guide-Dogs. Pieter van Niekerk is the Public Relations manager at SA Guide-Dogs. SA Guide-Dogs is focused on mobility and independence. SA Guide Dogs is the only Guide Dog training centre on the African continent and trains Guide Dogs for people who are visually impaired, Service Dogs for people who are physically disabled and Autism Support Dogs for Autistic Children. SA Guide Dogs also runs The College of Orientation and Mobility which has been training Orientation and Mobility practitioners since 1974. These practitioners teach people who are visually impaired to travel safely and independently with a long cane. Pieter is a strong believer that visually impaired and blind people are “otherly” abled and it is vital that “everyone has a positive attitude and a clear vision (figuratively) of your dreams and goals.”

Image: Jozef Rams from L'Occitane talking about their partnership with the SANCB.

Last but not least, the CEO of L’Occitane en Provence South Africa, Jozef Rams, shared the story of the L’Occitane Foundation past, present, and future. L’Occitane’s success is its fight for the prevention of blindness is partly due to their employees’ total commitment to the cause and has since become ingrained in their culture. With its program UNION FOR VISION, the L’OCCITANE Foundation is focusing on prevention and treatments, in order to give access to quality eye care services at an international level. L’OCCITANE South Africa launched a local partnership in October 2015 with the SANCB. Together, the organisations have facilitated the several rounds of eye screenings and subsequent treatments. Since November 2015, L’OCCITANE South Africa has fundraised almost R110 000 and will continue acting locally to fight avoidable blindness. The video from the screening can be viewed here Jozef kindly handed Ilse Hayes a gift from L'Occitane en Provence to welcome her back home, and to congratulate her on her exceptional achievements at the Rio Paralympic Games.

The BeSpecular World Sight Day celebration was brought to a close with a thank you message by our co-founder and CEO, Stephanie Cowper. Stephanie urged all the organisations present to remember the year’s theme: Stronger Together, and to continue to work in unison rather than apart. At BeSpecular, our motto is: Share Your Vision. We would like to encourage more and more members of our community to Share Your Vision with others so that we can further educate the public and improve the lives of countless other visually impaired, blind and deafblind people in South Africa and abroad.

In closing, we would like to extend a heartfelt Thank You to the following individuals and organisations for the role they played in ensuring our World Sight Day event was a success:

The first golf club I ever held was at the age of 8. It seemed like an impossible task to ever be able to hit the ball as high and as far as all the older guys. Equipped with a sawn off 8 iron and a pink grip, my obsession began for chasing this tiny white ball around some of the most scenic places around the world.